Baked Cinnamon Apple Chips Recipe with the oven is the healthier version of ready-made chips. Imagine how much fat you gain from one bag full of potato chips, whether it is hand cooked, kettle-cooked, store shelves would just hook you up with the different name, tags on it.

Whenever I munch on the potato chip, I always felt guilty that I'm adding cholesterol to my body.

'An apple a Day' keeps the doctor away, so this is another form of consuming an apple. I came across this recipe in a magazine and I was very tempted to try out this for the first time.

Do not forget to check into another interesting recipe for Crispy Baked Eggplant.

2. Slice them as thin as possible, like a paper. A perfect slicer will do this work easier.

3. Arrange the thin slices on a tray lined with parchment paper or aluminum sheet. Make sure the apple slices not to overlay on each other. Sprinkle ground cinnamon. Apples and cinnamon are inseparable.

4. Bake it in the preheated oven on 230 degrees for around 2 hours or until apple slices become crispier, by flipping it once or twice in between the baking time.

5. Leave the tray in the oven, even after switching off the oven. This process makes it, even more, crispier apple chips. Keep an eye on it, as it should not get over burnt too.

Baked Cinnamon Apple Chips are just melting in our mouth.

Tips and Variations for Baked Cinnamon Apple Chips Recipe:
2 apples for 2 hours of baking, Sure it is a healthy choice for the kiddos or grown-ups, who are always on chips. For others, just cut the apples, sprinkle cinnamon and start to enjoy juicy fresh apples. 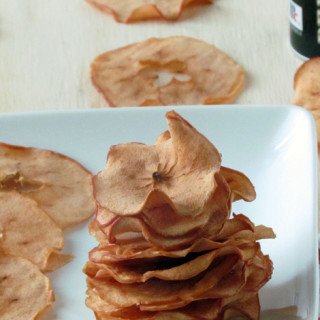