I received this Brown Rice Puttu Recipe from my sister in law. OMG, we fell in love with the texture of Puttu Brown Rice, its mild sweetness, it was very soft, fluffy. It made me think, why I haven't come across this recipe so far.

I'm familiar with the white puttu made of rice flour, and to say this genuinely, I'm not the fan it. BUT, when my SIL offered this Puttu Brown Rice as the morning breakfast, OMG, we fell in love with the texture, its mild sweetness, it was very soft, fluffy.

It made me think, why I haven't come across this recipe so far. So, here I'm sharing this brown rice puttu recipe which I borrowed from my SIL.

Slice some bananas and serve it along with puttu. Add ghee liberally if you are serving for the children. Looking for other Traditional South Indian Breakfast Recipes? Try this Semiya Upma, Neer Kozhukkattai.

If you are searching for other side dish recipes, do not forget to see coriander chutney.

Putt is the steamed rice flour mixed with coconut and sugar. Traditionally it is made with freshly grated coconut and palm sugar. Not only here in the United States, but back in India also, it is hard to get these authentic ingredients.

So due to migration and modernization, today we are making puttu with readymade rice flour, frozen coconut and brown sugar(which you find in the grocery stores).

If you want to make puttu using readymade flour, Chemba puttu podi would be the perfect healthy choice of making this South Indian recipe.

What is Brown Rice Puttu?

Brown rice puttu is the steamed brown rice flour. We get them as readymade packets in our Indian stores. And you can also follow this recipe to make ragi puttu or white rice puttu.

This Puttu-brown rice dish is a simple and straightforward recipe with a simple taste and flavor. If any outsiders taste this for the first time, they would totally change their perspective towards Indian food.

Many of the outsiders think that Indian food is always hot and spicy. Yes, I do accept it to a certain extent. Not all the dishes are spicy and hot. Mostly South Indian breakfast dishes are very mild and simple.

This brown rice puttu tastes sweet and similar to western’s rice pudding. This is usually served with a banana in the state of Tamil Nadu.

Puttu refers to steaming rice flour. So steaming is an important task, and that is done with some of the equipment discussed below.

Puttu Maker. Originally puttu is made with puttu maker, which nowadays can get it from the Indian stores or from online stores like Amazon. These puttu makers have a long cylindrical shaped stand. Where puttu flour will be filled in the cylinder and then fitted to the pot filled with water. Later it is steamed before serving.

Idli Maker. You may also use the Idli maker to steam the puttu flour. In the Idli molds, spread over a cheesecloth or a thin cotton towel. And spread prepared rice flour as a thin layer and steam.

Any steamer. The above two types of equipment are used traditionally, but you may use any of your steamers to make brown rice puttu. However, make sure that you use liner for the rice flour. 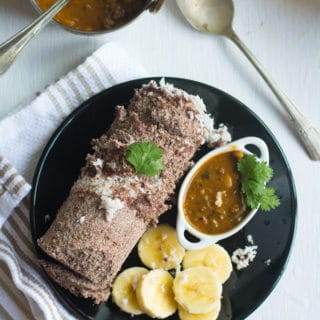 Brown Rice Puttu Recipe from my sister in law. OMG, we fell in love with the texture of Puttu Brown Rice, its mild sweetness, it was very soft, fluffy. It made me think, why I haven't come across this recipe so far.
No ratings yet
Print Pin Rate
Prep Time: 10 minutes
Cook Time: 10 minutes
Total Time: 20 minutes
Servings: 2 people
Calories: 1884kcal

For the jaggery syrup

For the jaggery syrup

Serving Suggestions:
1. Serve as breakfast, along with the banana.
2. Add a few spoons of ghee, to make it softer and even smoother.
3. Fill the final version of puttu in tumblers as molds for making a cylindrical shape.

Tips and Variations for Brown Rice Puttu Recipe:
1. You use either Idli pan or puttu maker, which gives cylindrically shaped puttu.
2. Replace cardamom with pure vanilla extract, for a different interesting flavor.
3. Making Jaggery syrup can be simplified further by keeping it in the microwave for about 25 seconds but need to be careful, as it tends to get burned easily.