Not all the 'Veg Biryani Recipe' are the same in India. They are unique in every home, restaurant and even every state they differ. The biryani takes a new avatar according to the cuisine and the ingredients which are locally available.

Biryani Origination and History: Though the Original Biryani(meat version) has various theories associated with its origination. To sum them up here,

Veg Biryani Recipe Origination and History: 40% of the Indian population are vegetarians. So, the people discovered and customized the Biryani to the vegetarian version. It is prepared by following the same procedure as the original meat version of Biryani. But vegetables will be substituted with the meat.

The Verities of Veg Biryani Recipe:
The varieties vary.

To classify them according to the region, there are many like:

Along with every type of Biryani, We see some important tips for making each Biryani.

Hyderabadi Biryani Recipe: The special about Hyderabadi Biryani is the method of cooking. They make layers of semi-cooked rice and the vegetable masala. Generally not more than 4 layers. It uses fried onions a lot in making and as well as in garnishing.

And they also do dum,  when the rice is 90% done, the pot will be sealed and allowed to cook further with the insulated steam. It mainly uses Basmati rice. The most famous side dish for this dish is Mirchi Ka salan(Green Chili Gravy), Onion ka Salan(Onion Gravy).

The coconut milk in this recipe, adds rich flavor and texture to Biryani. Another unique ingredient added to Biryani is curry leaves. And it generally served along with onion raitha.

Ambur Biryani: Ambur Biryani served with Dalcha, Brinjal gravy, and raitha. Usually made with Basmati rice/seeraga samba rice. The uniqueness of Ambur Biryani, they use curd for making and also it inherited the methods of both Hyderabadi and Chettinad Biryani.

Mughlai Biryani: These are most popular in northern states like Delhi. Where it is a perfect combination of beautiful flavor, spicier and perfectly cooked rice.

Lucknowi Biryani: It also called Awadhi Biryani, especially known for its less spicy but aromatic. Usually made with Basmati rice. It's a lighter version of Mughlai Biryani.  They follow the layering method for making Biryani.

Calcutta Biryani: They are unique with includes potato, rose water and raisins. Served with raita.

Malabar Biryani: Made with coconut milk, and less spicy and very flavorful. Specially made with the karma rice(jeeraka sala). Which are smaller than Basmati rice but has a unique flavor.

The ingredient based biryanis can be cooked following any of the region based types of biryani.  Like Mushroom Biryani can be made with Hyderabadi version, Chettinad version or Punjabi version. Everything tastes extremely well, so try experimenting with different cuisines and different vegetables. Which makes it unique and different every time you make and serve.

Selecting Vegetables for Biryani: Any vegetable would work for Biryani except watery vegetables. Vegetables like, cauliflower, peas, beans, carrots, potato, chickpea, mushroom, paneer. You can add any of these or any combinations of these vegetables.

Selecting the Spices: Cloves, Cinnamon, Bay leaves, Star Anise, Nutmeg, Cardamom, Black Cardamom, Fennel seeds are the important spices added for Biryani. Each of these ingredients has a unique flavor and taste.

Refer your recipe for using these ingredients.  If you are the beginner and do not want to take much risk, then use only Clove and cinnamon, these two ingredients alone can bring beautiful flavors.

Alternatively, you can also use Readymade Biryani masala available in the stores.

Selecting the cooking method: You can use the stovetop method, pressure cooker method or 'Dum' method. The process and procedure are the same until 90% of the cooking.

Assuming that you are using a pressure cooker from the first stage of Biryani. 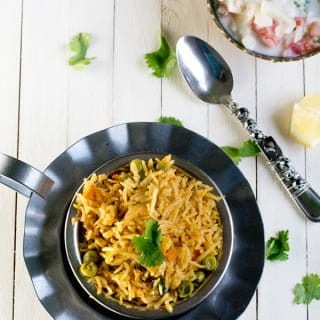